Read our study in Science Translational Medicine here. The study shows that one in ten children with HIV do not develop Aids because their immune system 'ignores' the virus.

Check out the 'In the news' section on our group page for interviews and articles about this work.

Goulder has received funding from the Wellcome Trust from 2002-2015 through Senior Clinical Fellowships and since 2015 through a Wellcome Trust Investigator Award, 2015-2021. He has also received RO1 support from the National Institutes of Health since 2000 (most recent RO1 award from 2017-2022).

The overall goal of our research group is to identify mechanisms that reduce disease in HIV infection and, in particular, to employ effective interventions to realise the high cure potential in infected children. 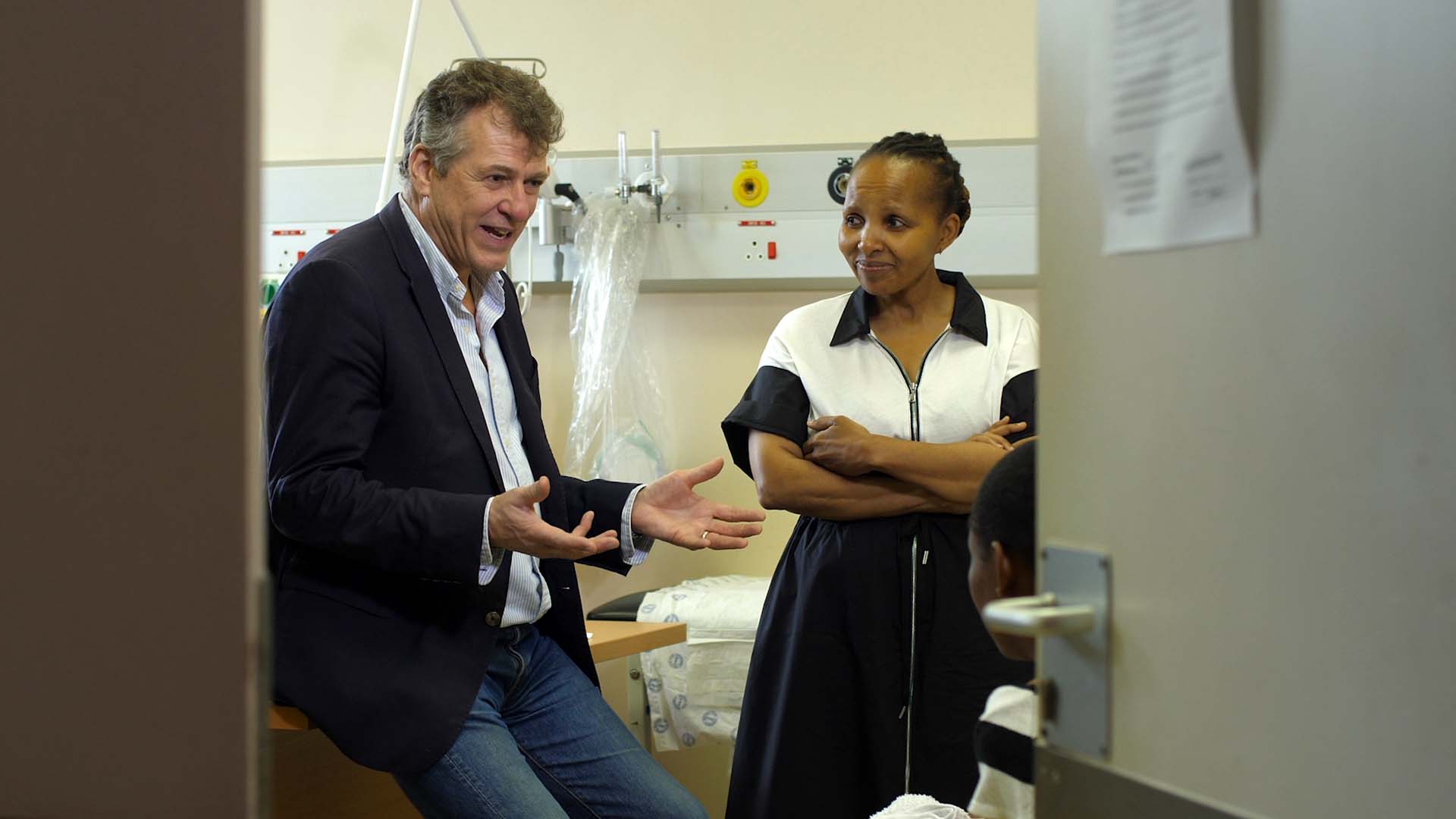 Study of HIV provides a model through which to understand mechanisms of disease, and prevention against disease, that applies beyond HIV, but to other infections, inflammatory conditions and malignancies. The COVID-19 epidemic is a case in point, in which both susceptibility to infection and disease outcome in those who become infected are greatly influenced by age. In HIV, children are highly vulnerable to HIV infection and yet at the same time present unique opportunities to understand mechanisms of HIV disease and the potential for HIV cure. in July 2015, we started a ‘Baby Cure’ study in KwaZulu-Natal, South Africa, in which babies who are HIV-infected in utero are diagnosed via point-of-care testing and ART initiated within hours of birth. We have enrolled more than 200 HIV-infected mother-child pairs onto this study. Initiating ART at birth in these infants is only the first step in a long and sustained process of ART adherence that is needed before interventions using broadly neutralising antibodies (bnAbs) can be successful in achieving cure/remission. Nonetheless this cohort includes a subset of children in whom we believe cure could be achieved via treatment using bnAbs.

One of the unexpected findings emerging from this ‘Baby Cure’ study is the fact that females are more susceptible to in utero mother-to-child transmission of HIV than males. This observation is made the more striking in sex-discordant twins in which the female is infected and the male is uninfected, something we have seen several times in our cohort. These findings demonstrate that the immune sex differences that underlying differential disease outcome from many infectious diseases (females generally have better outcome) take their origins prenatally. Exploring the factors that contribute to the immune sex differences that are already present at birth is a central focus of our current work.

Philip Goulder is Professor of Immunology at Oxford University. He is also Honorary Professor at the University of KwaZulu-Natal in South Africa, Research Associate at the Centre for the AIDS Programme of Research in South Africa (CAPRISA), Adjunct Faculty at the Africa Health Research Insititute (AHRI) in Durban, South Africa, and  Research Associate at The Ragon Institute of MGH, MIT and Harvard in Boston, USA. He holds Honorary Consultant Paediatric appointments at the John Radcliffe Hospital in Oxford and in the Department of Infectious Disease at Great Ormond St Hospital for Children, London. He is a Fellow at Brasenose College Oxford.

He obtained his first degree in Zoology at Oxford University in 1982, and then qualified in Medicine at Cambridge University in 1986, before completing training in Paediatrics through appointments at Edinburgh, Oxford, Duke University Medical Center in the US and the Royal Hospital for Sick Children in Melbourne, Australia. His investigative career started in 1993, undertaking a DPhil under the supervision of Andrew McMichael, followed by a post-doc, with appointments at Boston Children’s Hospital and Harvard Medical School, working under the mentorship of Bruce Walker. His research group is based at The Peter Medawar Building in Oxford. The focus of this work is the African HIV epidemic. To this end, he leads research groups in Durban and Kimberley, having established long-standing collaborations in South Africa, cofounding the UKZN HIV Pathogenesis Programme in 1998.

It has been proposed that cure in HIV infection is facilitated in paediatric infection because, first, combination antiretroviral therapy (cART) can be started very early in the course of infection; second, the tolerogenic early life immune environment dampens the ability of the virus to establish a large reservoir; and, third, because low replicative capacity virus is preferentially transmitted from mother-to-child. All of these factors reduce the size and diversity of the viral reservoir. However, while early cART initiation alone may be necessary, it is not sufficient to achieve HIV cure in children, other than in a few exceptional cases. To understand the mechanism by which HIV cure may be achieved, our group in Oxford has for 25 years so far collaborated with colleagues in South Africa, which is at the heart of the global HIV pandemic. Since 2015 we have been enrolling and following a cohort of now >250 mother-child pairs in KwaZulu-Natal who form the focus of this work. We are exploring the maternal, host immune, and viral factors that contribute to low viral reservoirs in these early-cART-treated children. In addition, we are exploring interventions that might be successful in facilitating HIV cure in these children, and in particular the role of broadly neutralising antibodies in this goal.

In animal species where the sexes are distinct, it is apparent that males and females have evolved in response to distinct selection pressures that give rise to sexual dimorphism. The differences between the sexes in appearance and behaviour are the consequence of this sex-specific selection. It is becoming increasingly apparent that the same forces of sex-specific selection apply to the immune system, resulting in quite distinct immune strategies that have evolved in males and females. In humans, this manifests itself in females typically making stronger immune responses to infections and vaccines, and generally achieving better health outcomes than males. However, autoimmune diseases and serious adverse events from vaccines are also seen more commonly among females. In children, these sex-specific immune effects are also evident, and in fact immune differences manifest themselves from soon after conception. In HIV, we showed that female fetuses are 2-3x more susceptible to in utero infection than male fetuses when the mothers themselves have been recently infected by HIV. In part this appears to result from sex differences in the innate immune response in the fetus. Our group seeks to use HIV as one approach to understand better the mechanisms and impact of immune sex differences in early life. In addition, the ability to study sex-discordant twins from birth via samples of cord blood, and their distinct responses to exposure to pathogens such as HIV and CMV, and to vaccines such as BCG, measles and even COVID, provides a second approach we are using to better define immune sex differences in early life and how they arise. The ultimate goal of this work is to improve the recognition and understanding of immune sex differences so that interventions to prevent or treat disease can developed to take them into account, and thereby improve health outcomes for all.